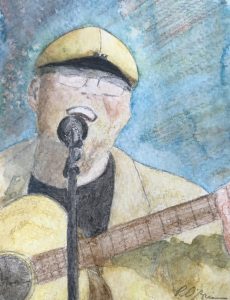 David has been singing forever, beginning in the family home in the suburbs of Montreal, but it wasn’t until one particular day in 2010 when a bank teller quite innocuously asked him what he did for a living, that for the first time in his life and without hesitation he heard the words, I’m a singer tumble from his lips in response. From that moment onward, David has embraced what he now humbly considers to be his chosen calling.

It was through the confluence of two unrelated occurrences that same year that would embolden him to make such a claim. The first was his successful audition and acceptance into Vancouver’s well respected City Soul Choir. Under the direction of Brian Tate, David has become a regular soloist, singing in front of this extraordinary 100+ gospel/soul inspired choir. He counts, having the honour of soloing with the renowned Linda Tillery of the Grammy nominated (Oakland based) Cultural Heritage Choir at a sold out Black History Month concert, as one of his more memorable choral experiences.

Later that same year David serendipitously met Sami Ghawi, Co-Founder of FUSIONpresents… and the two soon discovered sharing an unmistakable chemistry both in spirit… and performing together, that remains true to this day. Most recently, the two performed as Featured Artists in the Surrey Civic Theatre sponsored Artist’s Showcase.

David’s musical influences range from the inescapable inspiration of the Beatles, to the soulful stylings of Stevie Wonder, and the blues inspired vocals of Eric Clapton to the infectious groove of Peter Gabriel. These and so many more have served to inform his musical palette.

David is thrilled to have released his debut album entitled; Which Way is Up this Summer, and is exceedingly grateful to have been surrounded by a whole community of extremely talented friends in support of bringing this project to fruition.